Liveaboard vessels are the best way to dive Tiger Beach, Bahamas more diving, less effort and all inclusive. Stay on location all day for the best shark diving Bahamas and the best in Shark Encounters.

Tiger Sharks are usually solitary sharks, except for food concentrations and breeding they spend their time alone swimming the oceans. The Western Atlantic Tiger Sharks, including the Bahamas population seem to migrate north in the summer time, up to Bermuda and or Northeast coast of America. Winter time they travel to The Bahamas and even farther south. Most of the Tiger Sharks at Tiger Beach are female. Many we see on a regular basis and give them names. Often we see these female appearing to be pregnant and believe they travel north of the Bahamas, maybe to the Sargasso Sea to have their pups. 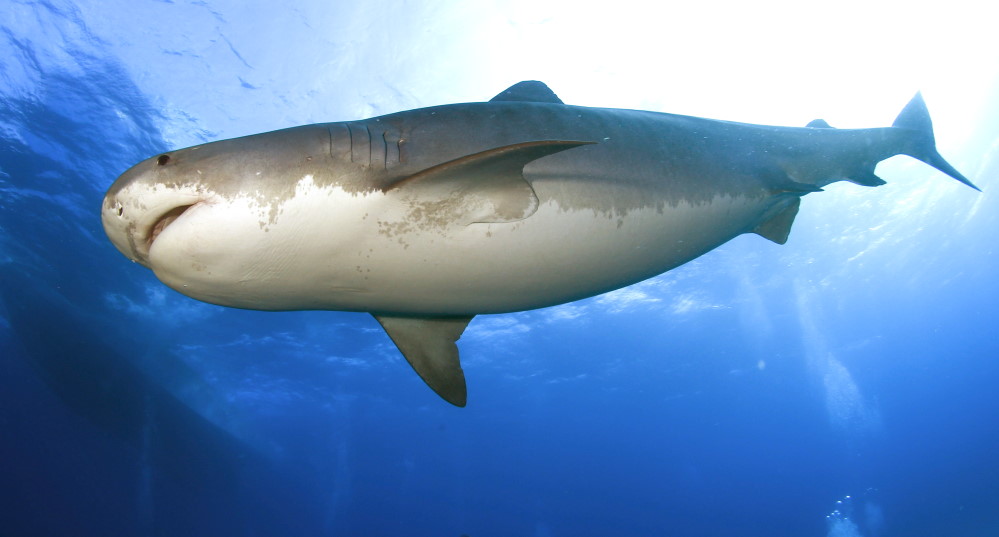 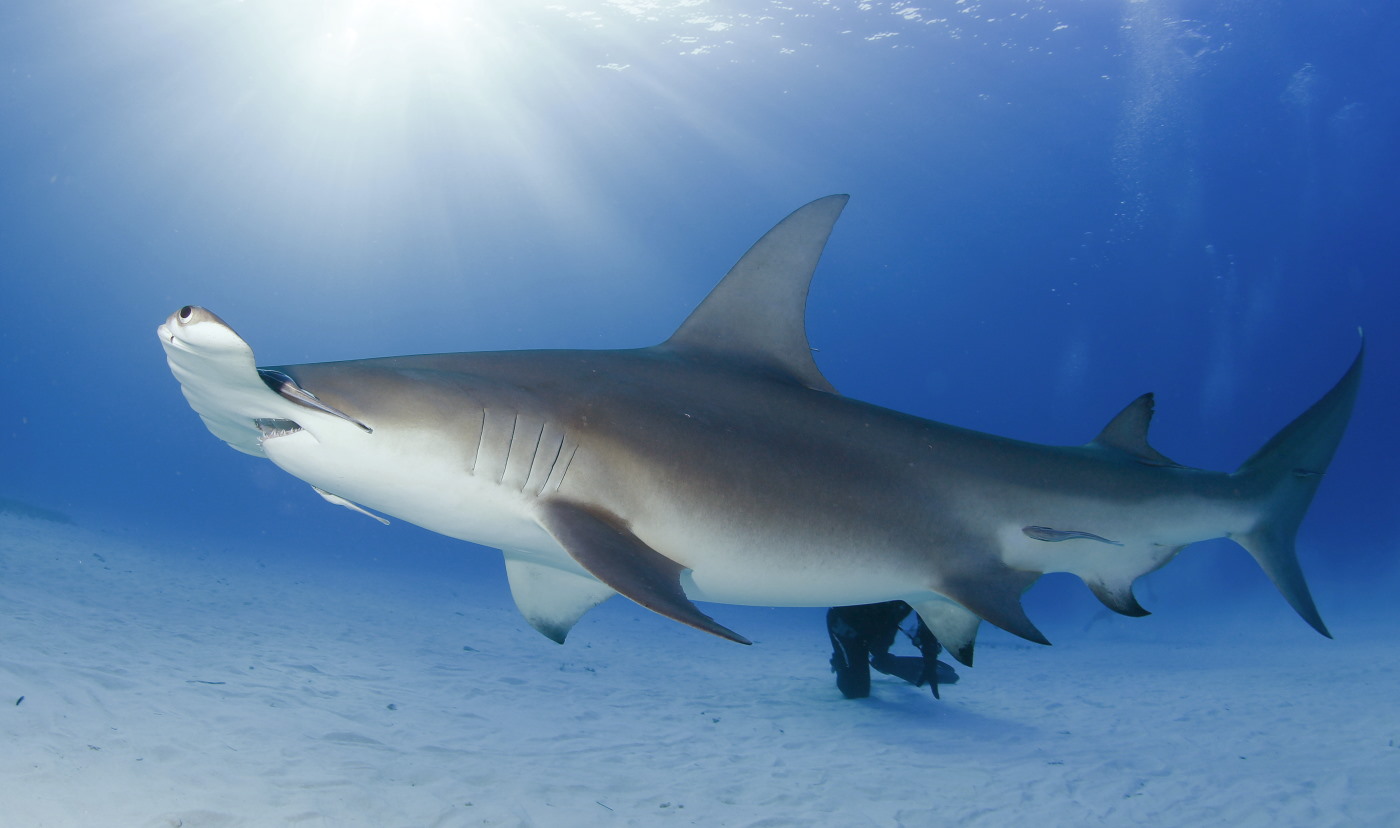 Great Hammerheads are an elusive and rare shark that is spectacular to see with their unusual heads and large dorsal fins. They appear mostly in the fall and winter, November through April when we run our exclusive shark trips to feed these large top predators. Great Hammerhead sharks, recognized by their hammer-shaped head and tall, pointed dorsal fin, reach lengths of 20-feet, but most individuals encountered by divers are between 10 and 14-feet in length. Feeding primarily at dusk, Great Hammerheads are considered a fierce predator. 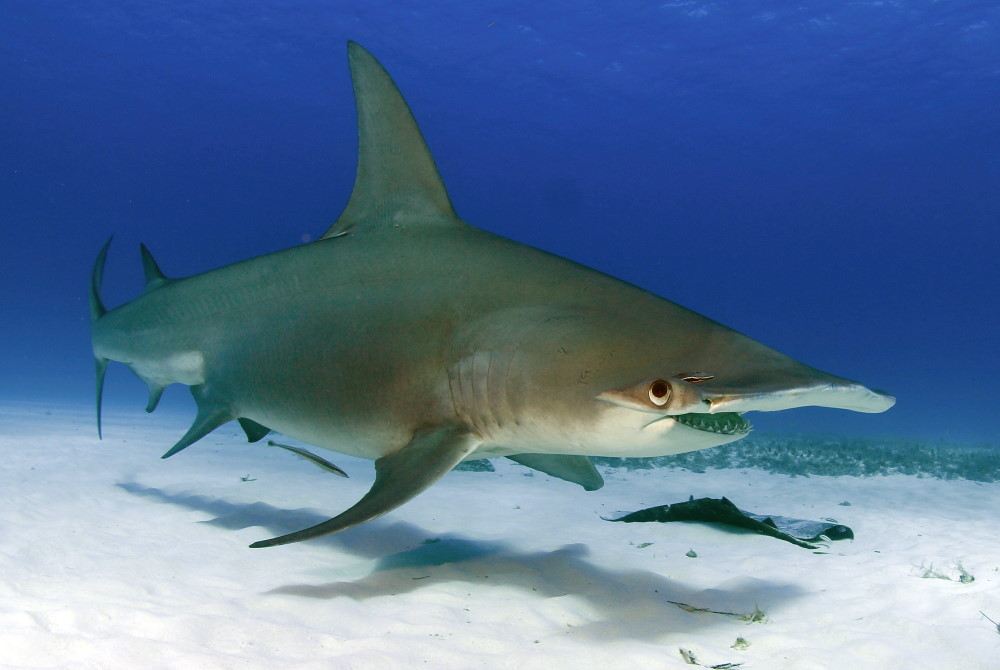 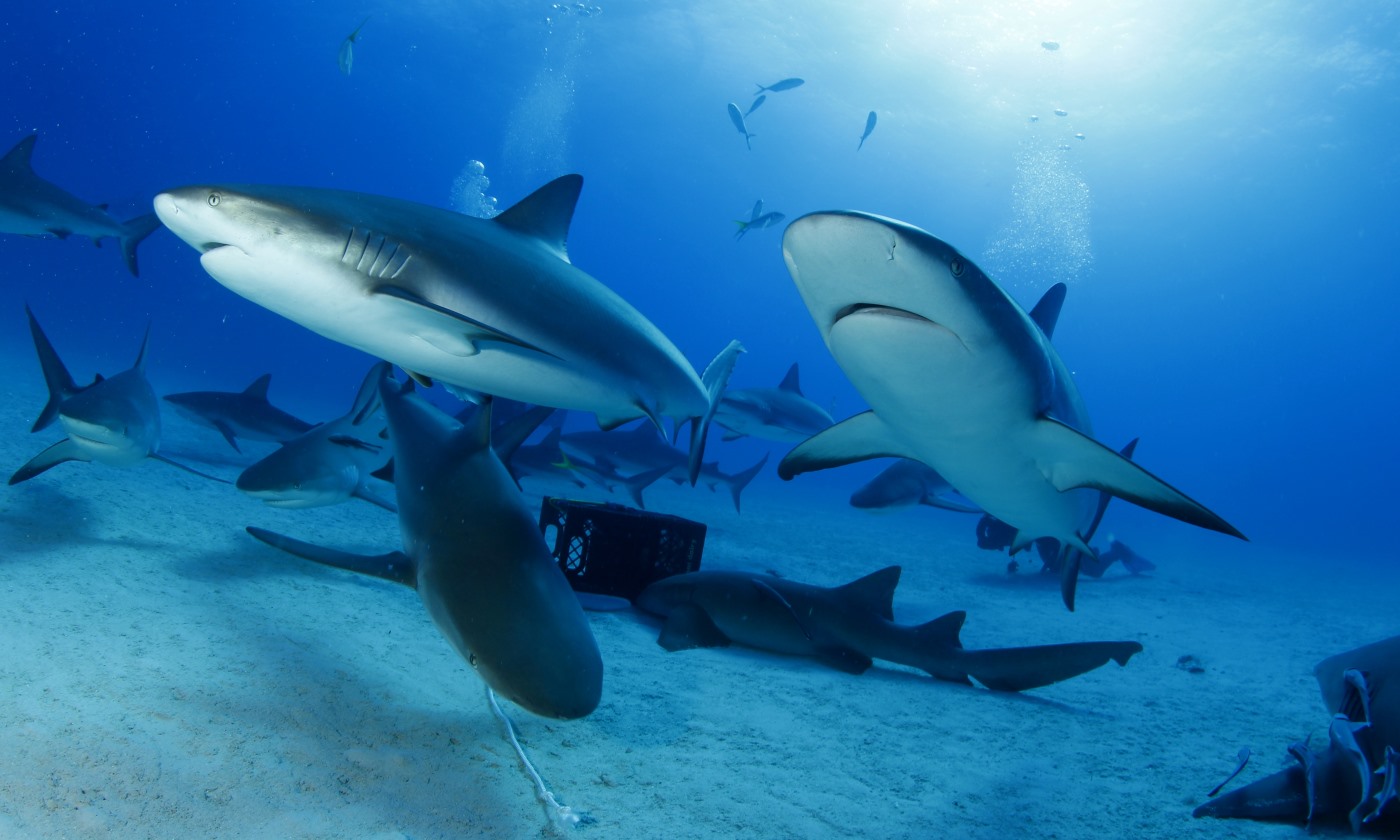 Caribbean Reef sharks live on the reefs and congregate on one particular reef where we feed the Tiger Sharks. Reef sharks are generally 3 to 5 feet long and usually there are 12 to 20 around one reef. This is a thrilling dive with excellent photographic opportunities. Reef sharks are very common around the Bahamas, but our reefs have colorful sponges to use as background for pictures. The reef has deep crevices to get below the sharks for great silhouettes. This all makes for the best shark dive in the Bahamas. 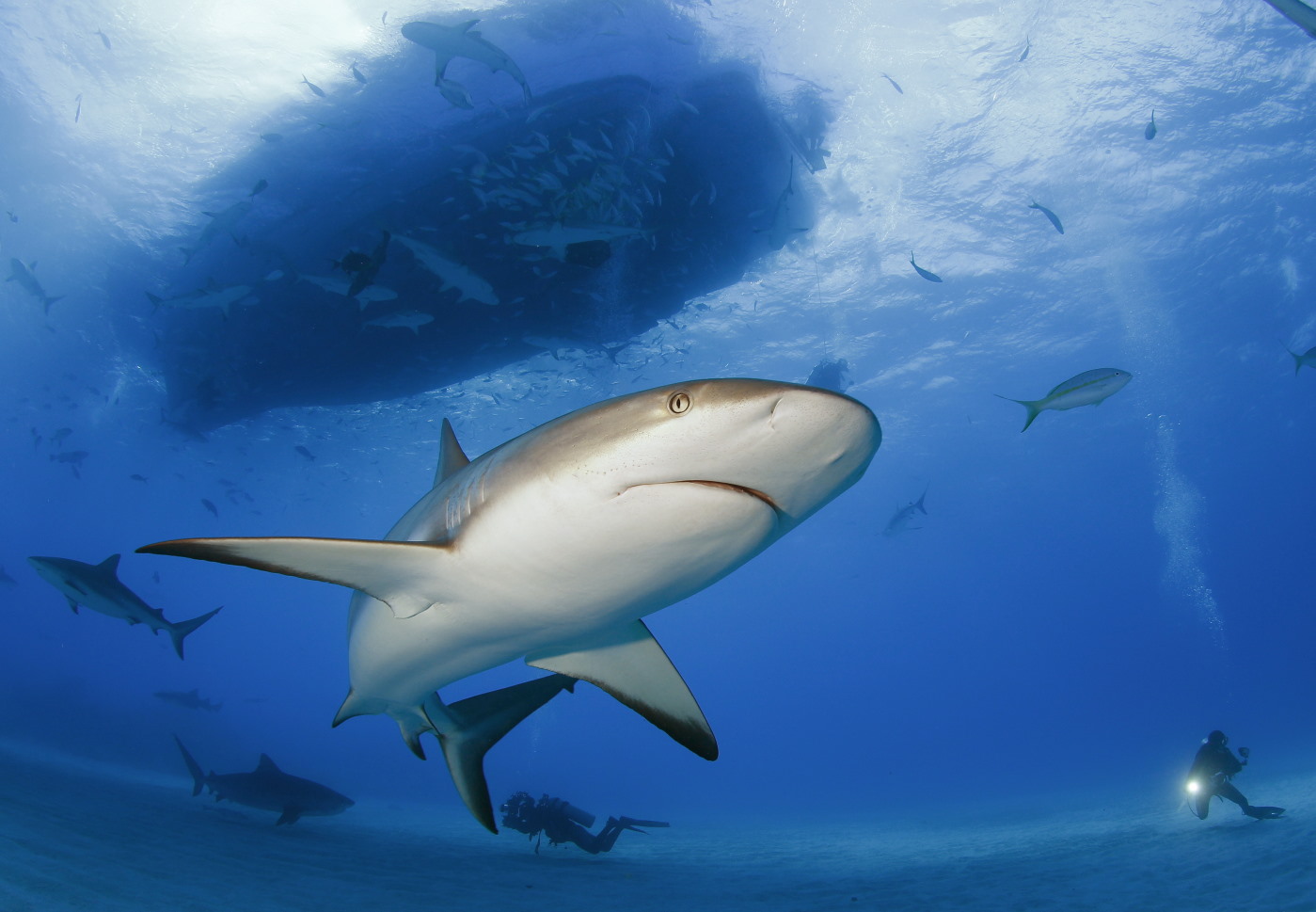 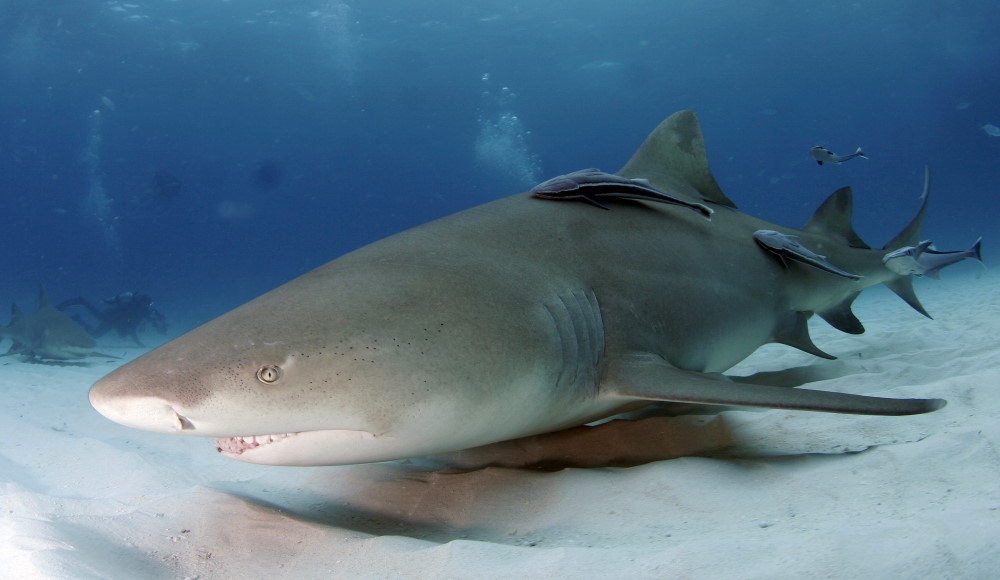 Lemon sharks of the Bahamas average about two to two and half meters and can number 20 to 30 at a time. Most of the population we see are females with the occasional male coming through. We do recognize many of them as regulars to our area. Some researchers have claimed that at least some of the Tiger Beach population travel to Florida and back. There are times that we see less of them so they must travel but are not really a migratory shark like the Tigers and Hammerheads. They are not a solitary shark, usually found in small groups. These Lemon sharks are bold and completely unafraid of humans. We do not feed them underwater because they are sold bold they would take over the underwater feeding. We do however occasionally feed them on the surface making for some pretty cool top side pictures. They swim in and amongst all the divers, coming in very close and are also very prevalent on the surface. 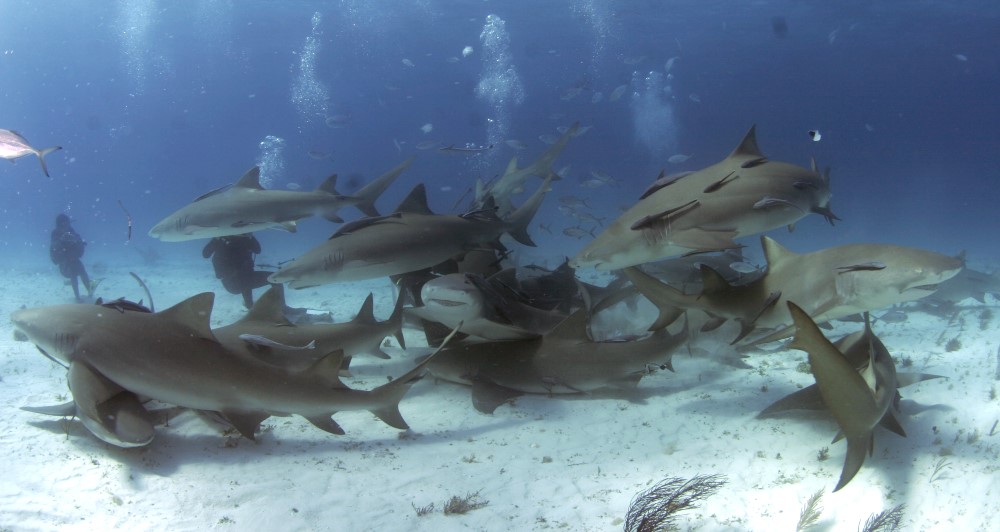 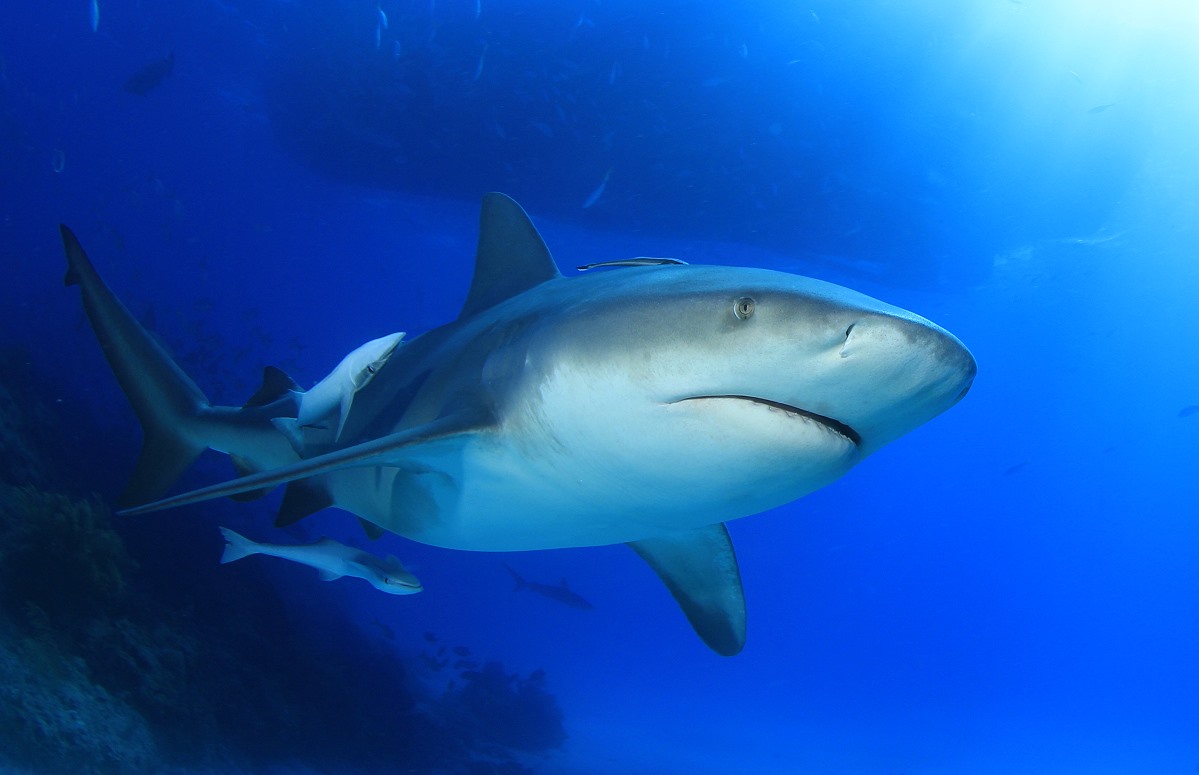 Bull Sharks used to be a very rare occurrence at Tiger Beach, but have recently moved into the area. The average about 2 meters and sometime we count upward of 6 individuals. Bull Sharks have a reputation for being more aggressive than most other sharks and probably account for the most bites on humans in The Bahamas and Florida. For this reason we do not feed them and prefer if they keep their distance, we even chase them away some times so they don't get too comfortable around people. They have become the sixth species we see at Tiger Beach which is cool as long as they keep their distance. in general you want to keep your eyes on them if they get close but don't make any sudden or aggressive moves to them.