Live aboard shark diving in the Bahamas aboard the Dolphin Dream. 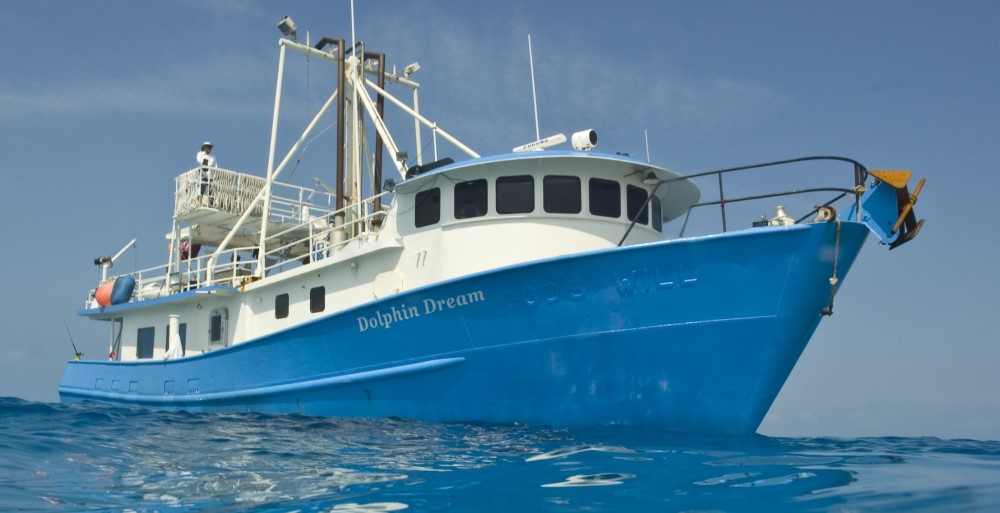 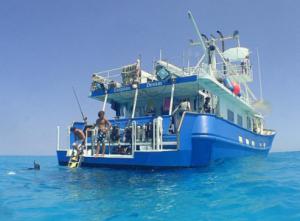 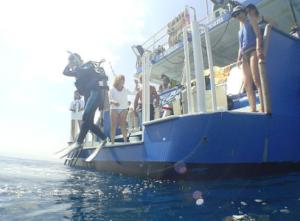 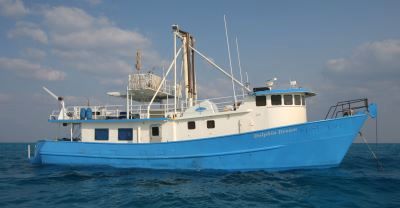 The "Dolphin Dream" is USA flag, 86' x 26' ocean expedition trawler yacht. She is designed to ride the sea in comfort, safety and style. She rolls and pitches even less than boats much bigger! Captain Scott's 25 years of live aboard diving experience went into redesigning her for the conversion to a SCUBA diving boat in 2004. Since then she has been completely rebuilt from stem to stern and is in top notch condition to ensure very few mechanical problems. She is stocked full of spare part and tools so even the occasional mechanical problem can usually be repaired with out any interruptions.

The "Dolphin Dream" is not a fleet boat, she is owner operated by Captain Scott, making a big difference in condition of boat and level of service. Captain Scott spends more time at sea on the boat than he does on land, making it truly his home. He always wants it to be clean, running good and have good food onboard!

As a USA flag vessel the "Dolphin Dream" is built and equipped well above any safety standards for the size vessel. She and her US crew are held to the highest USA standards, above and beyond many non-USA vessels. She has twin engines, twin generators, twin air compressors, fully air condition, safety chase boat, and all the other equipment to make your life on board comfortable and safe. There are five spacious cabins with full size upper and lower bunk beds and one large cabin with a double bed, for a maximum of 12 clients. The interior salon is located on the main deck making comfortable and safe from bad weather. The cabins are located aft of center line and down low, the most comfortable place in a boat. The salon has four benches and four chairs surrounding two tables for dining. The galley and salon are separated by a serving counter. There is a drink bar with a refrigerator, ice maker, coffee pots and a sink. There is room for cameras on shelves with electric and below the benches. There is a 27” TV, DVD, stereo, book and video library. Two spacious heads with showers, an outside shower and plenty of freshwater.

The back deck has tables for cameras, fresh water rinse hose, aquarium, fishing equipment and the stairs to the upper deck. The large built in platform has the scuba tanks and benches. The water is just a short distance for entrance and a ladder to climb out on. There are big flood lights that shine into the water for night swims or dives.

Life on board is informal and relaxing, comfortable and clean. While enjoying your solitude, you will encounter a stress free atmosphere where dressing down is encouraged and world news is only in the back of your mind. The days are spent experiencing nature and our nights are spent anchored under the stars. We avoid the tourist traps unless requested.

Meals onboard include outstanding home-style cooking. Breakfast, lunch, and dinner are prepared fresh, while snacks including fruit, nuts, and sweets are always available. Just think... you're on vacation, you don't even have to do dishes. Refreshments such as ice water, juices, coffee, hot and cold tea, and lemonade are included. Notify us ahead of time and we can accommodate any special dietary needs.

The vessel is manned a captain, 2-3 deck diving crew and a cook, all trained to give the safest and funnest service. Safety is our number one priority, particularly when your in the water. At all times there are two crew on the boat watching, in case anybody has a problem while snorkeling and scuba diving. There is always at least one crew in the water with you while snorkeling and scuba diving.

Join us on board for fun in the sun! 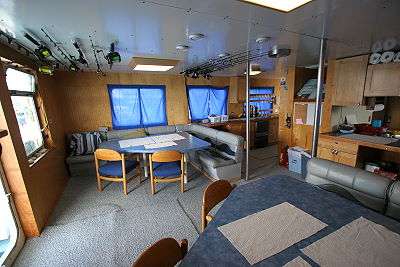 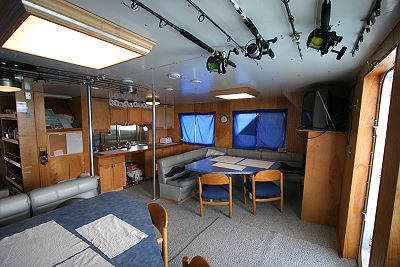 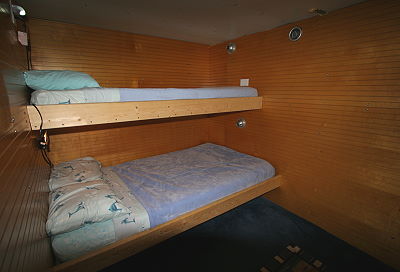 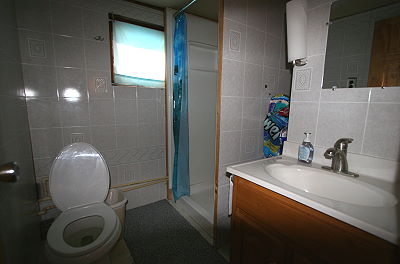 Why The Dolphin Dream Team?

The Dream Team Crew of the Dolphin Dream 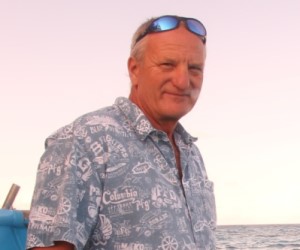 Captain Scott Smith has been interacting with and recording the behaviors of the Atlantic Spotted dolphin on the Little Bahama Bank since 1980. As captain of the charter/research vessel, Dolphin Dream, he spends over 30 weeks a year in the Bahamas with his dolphin friends.

Scott first encountered wild dolphins as a boy while fishing with his father in the Indian River near Cape Canaveral. Bottlenose dolphin would play in the boat's wake and often accompany them into the night. This began a life-long passion for the sea and its inhabitants.

As a teenager, Scott began working with his family in their liveaboard dive boat business. It was during this time he first swam with the friendly and curious Spotted dolphin of the Little Bahama Bank.

Between dives, passengers would occasionally swim with the Spotted dolphin as a diversion, and interest grew from there. Salvage divers had first encountered this resident group of dolphin while working treasure wrecks in the area.

In 1986 Scott became captain of the 65 ft. Dream Too. By this time the focus had shifted from diving to dolphin encounters and the human/dolphin relationship began to flourish. Scott didn't initially view them as research subjects; he started to build a relationship centered around play and trust. As he began to recognize individual dolphins with distinct personalities, he started naming them and compiling an identification catalog. Over time, Scott cemented a unique bond with these dolphin. Two generations of them have literally grown up with Scott, allowing him to observe wild dolphin behavior that has never before been seen.

Scott has identified and keeps track of over 100 individual Spotted dolphin, about 30 of which he can recognize on sight. Since the number of spots per animal increases with age, he must continually update his I.D. catalog. Photographs are taken of both sides of each dolphin, then logged into a database. A detailed record of each encounter is also maintained. Scott is an accomplished underwater photographer and videographer, and his relationship with the dolphin has enabled him to document a comprehensive range of behaviors.

Scott and the Dream Team have played host to visitors from around the world including feature film crews, National Geographic, The Cousteau Society, and many of the world's top underwater photographers. Scott has been featured in a on-hour documentary for Japanese television, educational videos, and the subject of books and magazines worldwide. 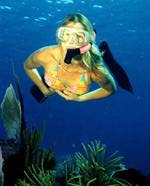 Robin has a U.S. Coast Guard 500-ton Master's License. She is also an engineer and divemaster, and has been involved with boats and the ocean most of her life. In 1981 Robin began a voyage on the Mechanic, a 60ft. sailboat, and spent the next 10 years at sea, traveling the east coast of the U.S. and throughout the Caribbean. She worked as a commercial fisherman, marine mechanic, salvage diver and island trader, eventually joining the Dream Team in 1992. Robin's years of experience gives her a wealth of information and many interesting stories she shares with the passengers and crew.

One of Robin's strengths is her amazing mechanical ability - from routine maintenance to major overhauls. Her skills are diverse' she is an accomplished diesel mechanic, electrician, plumber and carpenter - all of which are essential in keeping a boat running smoothly. She can fix anything!
Robin is a skilled freediver and enjoys giving tips to passengers on swimming with wild dolphins. She is a favorite of photographers, and has appeared in many magazines swimming with the dolphins. Robin also loves fishing and collecting specimens for her onboard aquarium. She even keeps a microscope on the boat for examining planktonic creatures! 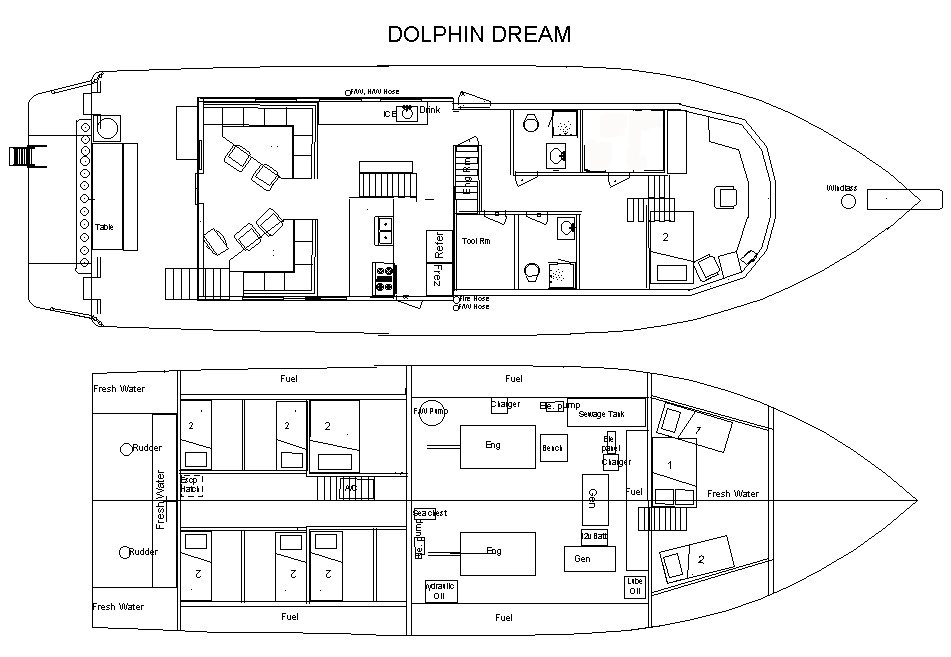